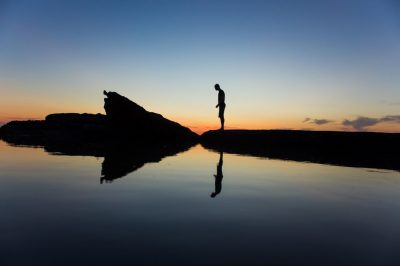 Every director I’ve ever worked with wants change (even though we’re all meant to hate it). You want more growth, sales, time, influence, certainty; better decision-making, conversations, relationships, sleep, people; less stress, conflict, failure – you get the picture…

And you look hard for it – very hard indeed. You re-engineer your business, recruit new people, train them, develop new strategies, create new products and services, go to the gym, borrow money and just generally do more, try harder, get smarter.

It’s all (well most of it) good stuff. Many of you will learn a great deal in the process and become experts in your fields, amassing knowledge through research, study and experience. The sky’s the limit.

But all this knowledge and know-how is about the stage you find yourself on – the situation, the circumstance, the outside. How much is about you, the protagonist in your play? How often do you put your preoccupation with the situation to one side (even temporarily) and turn the focus of attention inwards to find out what’s really going on inside?

Since the dawn of civilisation we have been exhorted to look inwards to understand ourselves, not just outwards to understand the world we live in. The Oracle at Delphi had Know Thyself inscribed over the entrance to the cave. Socrates told us that The unexamined life is not worth living. Why?

Because your life and business are a reflection of the way you think.

So the better you know yourself, the better equipped you are to deal with the circumstances that you find yourself in.

Sam is the Sales Director of an international electronics company that designs and manufactures electronic sensors for the automotive sector. He’s had a good career but over time he’s finding his job more challenging and less rewarding. He’s finding that the job of leading his team of sales managers has changed markedly as new people have come in and the team has grown. The way they do business is different from the way he used to do it and he’s starting to feel rather disconnected from them. He feels a sense of inadequacy on occasion which leads to frustration and even anger. He reacts by taking control, managing the detail and in his words “leaving nothing to chance”. His workload has grown and what used to get him out of bed in the mornings now generates a sense of dread.

Sam sees his situation clearly. What he doesn’t see are the matrix of ideas – his mindset – that condition his experience. Ideas such as:

These ideas lie just beneath his level of consciousness – they are sub-liminal – and as such, they get to generate the emotions that Sam attributes to the world he finds himself in. These self-limiting ideas, in addition to creating emotion, also trigger negative, reactive behaviours, upsetting relationships at work and at home. He’s not happy.

And the first step to disempowering these beliefs is to become aware of them and to observe how they condition his emotions, attitude and behaviour.

So, that’s all good for Sam, but how does it impact on the business? Well as a director, his influence is far-reaching – his mindset affects all those he comes into contact with. Feeling that he lacks control over his situation, he looks to exert more control over whatever he can – particularly his people. Their performance is a function of how they are led, so as Sam becomes more aware of his inner dynamics, his leadership style changes to adapt to the situation rather than his emotions. Everyone benefits.

Developing Self-Awareness is critical to disabling the self-limiting beliefs that keep us trapped in a painful cycle of reactive behaviours. No other path will open up the choices that we need to successfully transform ourselves and our businesses.