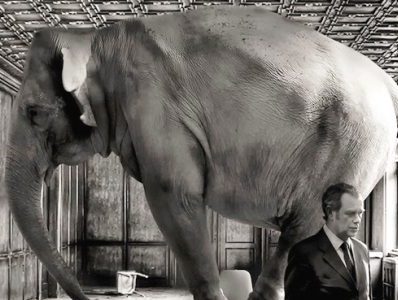 How the Big Issue that no one wants to talk about can strangle progress.

A few years back I ran a Strategy workshop for a small, rapidly growing company. About 30 turned up – everyone, apart from Mike, the MD, who had deliberately stayed away so as not to inhibit the discussions in any way.

The day started well with much open and honest dialogue about the challenges the business faced, both operationally and culturally. There was a definite sense that the current realities of the company – the positives and the negatives – had been shared with clarity and candour.

Having established this ‘foundation’ I again split the team up into small groups and asked them to start articulating a vision of the future, informed by, but not limited to the outputs of the previous session.

Now it’s important to understand that I have used this basic approach many times, to great effect. For brevity I’m omitting details of the process, but suffice to say: it works.

And, one of the ways that you know it’s working at the time is through the buzz in the room, the noise level, animation, energy, engagement…

On this occasion what happened has not happened to me before or since:

Not a word. You could hear a pin drop.

Lots of furtive looks, uneasy body language, occasional nervous giggling. Eventually a few of the braver employees started exchanging words but the energy and the will to continue had evaporated – completely.

I did the only thing I could and called them all together:

“What on earth is going on?“, I said. “What’s happened?” more silence…

“Unless you can tell me what has happened, there’s no point continuing and we might as well all go home.” An even longer silence ensued.

Eventually, a director took me to one side and explained:

“It’s because Mike’s not here. Without Mike, there’s no point in talking about the future or planning anything because he’ll just change it all.”

And that was it. That was the Elephant in the Room: Mike’s autocratic management style which was effectively throttling the creativity and aspiration of everyone in the room.

And he wasn’t even there!

The Elephant in the Room had made Monkeys of everyone…

…Monkeys that See no Evil, Speak no Evil and Hear no Evil.

Interestingly, it wasn’t the 2nd session that hadn’t worked, it was the 1st. The 1st had failed to make a compelling case for the subject of Mike’s overbearing influence on the business to be discussed openly. His behaviour and attitude had remained as the Elephant in the Room that no-one wanted to acknowledge.

And this is exactly why open and honest dialogue on the ‘here and now’ is a fundamental pre-requisite for any discussion of the future – any Vision – any Strategy.

So now, however candid the discussions appear to be, I remain alert to the possibility that there may be more Elephants lying around. And if the energy and involvement in the room changes, I may just have tripped over one.

My hunch is that all businesses have Elephants in the Room to a greater or lesser extent. This was a big one. Big enough to send us home early, having made a Monkey of us all… So whatever you do,

Don’t let the Elephant in the Room make a Monkey of your business.