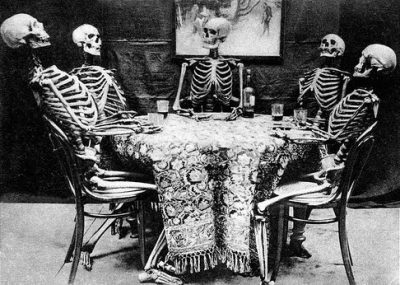 After years of attending all sorts of meetings in all manner of organisations, I reckon they all fall into 1 of 2 categories:

Some meetings are just not worth holding – they do more harm than good. And I suspect we’ve all been there at some time or another.

So how do you ensure that your next meeting doesn’t end up like the one in the picture?

Here are some Don’ts that will help you avoid them:

Some of these might sound rather draconian and even impractical. There will be some exceptions – every good rule has them. Let’s look at the detail:

Large meetings are almost always ego-driven, playing into the status of hierarchy. One important person speaks and lots of lesser mortals listen to their pearls of wisdom. If there is news to be broadcast, do it electronically. If it’s bad news, do it 1-2-1. If it’s good news, have a party. Meetings are for discussion and a meeting of minds, not the injection of information into brains.

Being punctual demonstrates respect. Meetings that overrun are the result of sloppy, ill-disciplined management. There is no excuse.

Using Power Point is not a statutory obligation. You don’t have to use it. If you’ve got great pictures then go ahead – even if they have nothing to do with your presentation. But please, never use it as an autocue and remember: bullets kill.

Small groups inhibit grand-standing by those with big personalities and encourage the wall-flowers to engage. If you have 12 people in the meeting, set the scene and then split into 3 groups of 4 to discuss. Get the groups to cross-pollinate ideas at least every 30 minutes.

Maintain Engagement by switching off electronic devices and not allowing comings and goings. You’re either there or you’re not, in or out, no halfway house.

Tables usually just get in the way. They provide a nice support for laptops and a way of hiding phones. And how much water do you need anyway? They also mean that you get to engage with half a person – hopefully just the top half – when you really want to be talking to a whole person. If body language is irrelevant, why have a physical meeting at all?

Keep Meetings Short. If you really have to go over an hour, give people breaks – it’s not an endurance test.

Now the one great exception to all this is when you want to tap into the creative experience and creativity of a large group. Then you can use a format called Open Space, which allows groups ranging from under 20 up to several hundred to engage at the same time and in the same space, effectively.

Finally, don’t stand (or sit) for bad meetings – do something about them. They are a curse of many organisations and breed through ignorance and apathy. Being in the same room isn’t enough – the ultimate objective is:

A Meeting of Minds